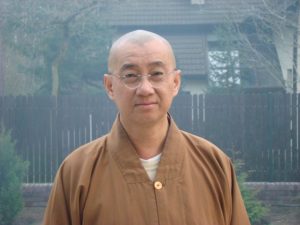 Ordained by Master Zhu Mo in Penang, Malaysia, Chi Chern Fashi studied at the Fo Guang Buddhist College in Taiwan. Following two seven-day retreats with Chan Master Sheng Yen (Shifu) in 1980, a period of fasting at the Institute of Buddhist Culture (Wen Hua Guan) led to a profound experience that he describes as being like “a stroke of lightning in a dark night, [giving him] a glimpse of the path and destination.” With Shifu’s confirmation, he returned to Malaysia to teach meditation. He received Dharma transmission from Chan Master Sheng Yen in 1986. Chi Chern Fashi is currently the principal of the Malaysian Buddhist Institute, and is one of the most respected meditation teachers in Malaysia and Singapore. He continues to lead retreats in Southeast Asia, the United States, and Europe. After recent retreats in Croatia, Poland, and Switzerland, he has been sought after—–as his detailed instruction, straightforward manner, yet relaxed and affable character have earned him a high level of esteem in the European continent.